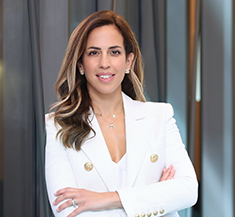 Burcu Geris graduated from Bogazici University, Department of Business Administration in 1999 and subsequently received her MBA degree from London Business School and Columbia Business School. She began her professional career at Garanti Bank where she worked in Treasury and Project Finance departments from 1999 until 2005. Joining TAV Airports in 2005, Geris led the Project & Structured Finance Department of the Company. Burcu Geris was appointed CFO in 2012 and Vice President in 2014. She was named a “Young Global Leader” by the World Economic Forum in 2015 as well as a “Rising Talent” by the Women’s Forum in 2013. She was named one of Turkey’s 50 Most Influential CFOs by the Fortune magazine for three straight years in 2016, 2017 and 2018. In addition to serving as a Member of the Boards of Directors of TAV Group companies, Geris is also a Member of Women Corporate Directors (WCD), Professional Women’s Network (PWN), Global Board Ready Women (GBRW), Global Relations Forum Young Professionals Program, and BUMED, CBS and LBS Alumni Associations. She is married with two children.

All Sessions by Burcu Geriş