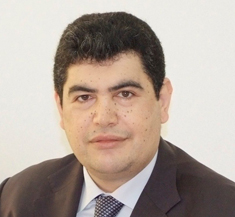 Board Member and the Head of the Legal Department, Petroleum Administration Authority (LPA), Lebanon

Mr. Gaby Daaboul is a Board Member and the Head of the Legal Department at the Lebanese Petroleum Administration (LPA) since December 2012. From December 2014 to December 2015, he served as chairman of the LPA.

Before his appointment to the LPA. Me Daaboul was the legal advisor to Lebanon Ministry of Finance on petroleum legislations in 2011 and 2012.

Prior to that, he was a member of Lebanon’s governmental committee in charge of establishing and drafting the Petroleum Policy (2007-2008) and the Offshore Petroleum Law no.132/2010 (2009-2010) and other Petroleum Regulations.

Me. Daaboul, a member of the Beirut Bar Association since 1994.

Between 1988 and 2002, he worked as a journalist and press reporter at the Lebanese “Al Anwar” newspaper.

Me. Gaby has a Law Diploma (license en droit) from the Lebanese University in 1993.

In 2007, he earned a Diploma in Petroleum Policy and Resource Management – PETRAD-Norway.

All Sessions by Ghaby Daaboul