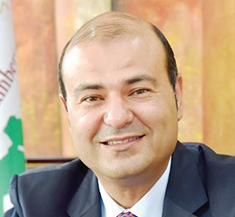 Secretary General of the Union of Arab Chambers

Dr. Hanafy held several Governmental, academic, business and consultancy positions, most recently Minister of Supply and Internal Trade in Egypt, Chairman of Internal Trade Development Authority and Dean of College of International Transport & Logistics, in the Arab Academy for Science, Technology & Maritime Transport. He was awarded “The Best Minister” for two consecutive years according to top surveys, in recognition of developing a New Food Subsidy System serving more than 70 million Egyptians. Dr Hanafy had a remarkable contribution in developing the Egyptian internal trade, through launching a number on initiatives that were reflected in developing internal trade and in making it more efficient. These initiatives include: “Egypt's Food Industries”, “Consumer Complexes E-Linking Project”, “Gameeti Project”, “Internal Trade and Logistics Zones” and “Upgrade The Egyptian Storage Capacity”. Dr Hanafy was the Chief Editor of the Economic constitution of Egypt. He was Chairman and board member of several holding companies in the private and governmental sectors. He participated in and headed a number of consultancy projects for the Arab League, the World Bank, the International Monetary Fund, the World Trade Organization, the United Nations, the International Labor Organization and the European Union. He was also an Economic Advisor for the Federation of Egyptian Chambers of Commerce and provided consultancy services to several national & multinational organizations. He holds MSc degree in Regional Development and PhD degree in International Trade. He also holds many diplomas in International Trade, & Business Administration from top American universities. On the academic level, Dr Hanafy - is a Professor of Economics and International Business and has a wealth of profound publications.