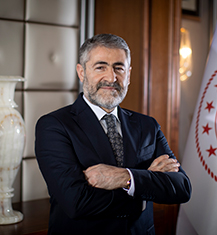 Treasury and Finance Ministry Of Republic Of Türkiye

H.E. Dr. Nebati received his Bachelor’s Degree in Public Administration from the Faculty of Political Sciences at Istanbul University. He received his Master’s Degree in International Relations from Istanbul University. He completed his Ph.D. Degree in Political Science and Public Administration at Kocaeli University. He served as a Board Member of the Istanbul Provincial Directorate and the Chairman of the Organization at the Justice and Development Party (AK Party). He was elected as a member of the Central Decision Making and Administrative Committee (MKYK) at the 4th Ordinary Congress of the AK Party. As a Central Executive Board (MYK) Member, he served as the Vice-Chairman of the AK Party in charge of Financial and Administrative Affairs. He was elected as a Member of the Parliament from Istanbul for the 24th, from Şanlıurfa for the 25th, and from Istanbul for the 26th Parliamentary Terms. He served as the Deputy Minister at the Ministry of Treasury and Finance. During his tenure as Deputy Minister, he met with representatives of the real sector and finance sector in many cities, especially in Istanbul, and held consultation meetings. He was a member of the Independent Industrialists and Businessmen Association (MÜSİAD) Board of Directors and still a member of MÜSİAD’s High Advisory Board. He is a member of the Alumni Foundation and Association of the Faculty of Political Sciences of Istanbul University, the Society for Dissemination of Science, Ensar Foundation, Turkish Youth Foundation (TÜGVA), Önder Foundation, International Technological Economic and Social Studies Foundation (UTESAV), Turkish Language and Literature Association (TDED), BEK, İDD, İDV, and the Culture, Society, and Family (KÜLT) Foundation. He is the Chairman of ÜTEV and the Chairman of the Inter-Parliamentary Jerusalem Platform, a member of the Scientific Board of the City Think Tank at Esenler Municipality. He has studies titled From National Vision to Conservative Democracy, and the Dominant Party System and AK Party as Turkey’s First Dominant Party. He performed studies on economic management, urbanism, identity, and Islamic Philosophy. He is married and has four children.