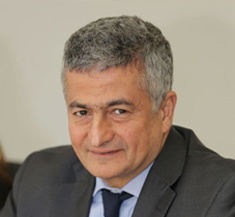 Youssef El Khalil is the current Minister of Finance in the cabinet of Prime Minister Najib Mikati formed on September 10, 2021.

Born in Tyre, South Lebanon in 1958, he is married to Sana Salhab and they have two children together: Soraya and Nadim.

Dr. El Khalil joined the Lebanese Central Bank as an Economist in 1982. His most recent appointment was as Executive Director of the Bank's Financial Operations Department. His responsibilities included representing the Bank in its official meetings with international organizations, which has allowed him to participate in formulating the Central Bank's contribution to the Paris reform programs for Lebanon.

He joined AUB as a part-time Lecturer in Economics in 1989. His main emphasis has been on Development Studies, the Economics of growth, Managerial Economics and Economic History. He is the author of several published articles on Economic Development in Lebanon and the Region, and an invited speaker and participant in numerous national and international conferences and workshops.

In parallel to his professional and academic career, Youssef El Khalil is the co-founder and president of the Association for the Development of Rural Capacities (ADR) where he has contributed to the design and implementation of projects pertaining to low income housing, microfinance, vocational training and agricultural development.

He heads also a number of non-governmental organizations in Lebanon and abroad, including the Euro-Arab Association for Development and Integration (READI) and the president of Teach for Lebanon (TFL), the Lebanese Microfinance Association (LMFA), and the Lebanese Jujitsu Federation.