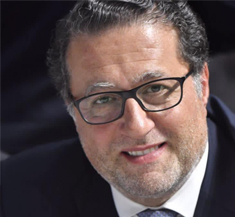 Mohamed Choucair is born in Beirut in 1968 in a family engaged in manufacturing and trade. He is married to Mrs. Amna Kabbani and they have four children. His father, Nizar Choucair had focused his activity, at that time, in the manufacturing and sale of high brand chocolate and related items as silver plates and gift articles.

During the Lebanese war the family moved to Paris, where he continued his secondary and university studies, and stayed until the end of the war in 1990. Mohamed was graduated in International Business Studies, and joined the family business in Beirut and abroad. He was in charge at start of the American and Canadian operations, then he took the responsibility of the factories and outlets established during the war in Saudi Arabia, which were at that time the major assets of the Company.

Mohamed Choucair is currently Chairman of PATCHI Group, Board member at Solidere, President of “Echtab Holding” and “Ekar Estate Capital” and Board Member of “Benchmark”.

He assumed responsibilities in several professional associations and contributed to the foundation of some of them, for which he felt the necessity. He started to enroll in ‘Young Arab Leaders’; he contributed to the foundation of ‘Bader’, an association that helps young entrepreneurs to start business, where he was Board Member; between 2005 and 2011 he was Board Member of ICC-Lebanon; between 2005 and 2010 he was Board Member of the ‘Chamber of Commerce, Industry and Agriculture of Beirut & Mount Lebanon’-CCIA-BML; during the same period, from the 30th of June 2005 till the 27th of May 2009, he was appointed Honorary Consul of the Republic of San Marino; in 2006 he contributed to the foundation of the ‘Lebanese Franchise Association’ and was elected as Vice President till 2010.

In 2010, Mohamed Choucair was elected Chairman of the ‘Chamber of Commerce, Industry and Agriculture of Beirut & Mount Lebanon’; and in 2010, Chairman of the Federation of the Chambers of Commerce, Industry and Agriculture in Lebanon; and in April 2012, he became Chairman of the Association of Chambers of Commerce and Industry of the Mediterranean – ASCAME – based in Barcelona and grouped 220 chambers in the Mediterranean. In May 2013, he was elected Vice President of the Economic Cooperation for the Mediterranean and Middle East – OCEMO – In March 2014, he was elected Vice President of the General Union of the Chambers of Commerce, Industry & Agriculture of the Arab Countries – GUCCIAAC. In 2015, he was elected Vice President of the Chamber of Commerce Franco-Lebanese. On the 23rd of November 2016, He was appointed the Honorary Consul of the Republic of FIJI. Now he is member in the advisory Board in Beirut Arab University faculty of Business Administration and member in the advisory Board for the faculty of business and management of the Balamand University. He is also Bureau member of the Economic and Social council in Lebanon. In January 2018, he is appointed Chairman of the Lebanese Economic Organizations. On February 2019, he was appointed Minister of Telecommunications to the Lebanese Government.

Mohamed Choucair has regular interventions on TV and other media on the economic situation in the country and in the Mediterranean.