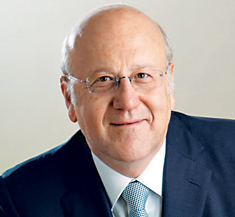 President of the Council of Ministers, Lebanon

Najib A. Mikati, the President of the Council of Ministers of Lebanon, is member of the Lebanese

He began his political career in 1998 as the Minister of Public Works and Transport, and remained in

post until 2004, under three consecutive cabinets. In 2000, he was elected for the first time as a Member

of Parliament representing Tripoli. In 2005, he became President of the Council of Ministers of Lebanon

and during his mandate, he steered the country towards what was qualified as notable democratic

elections. In 2009, he was reelected Member of Parliament representing Tripoli for a mandate of four

Mr. Mikati is the co-founder of M1 Group, a family-owned holding with interests in various sectors such

Mr. Mikati is active in various think tanks and international organizations. He is a senior member of the

Dean’s International Council at the Harris School of Public Policy at the University of Chicago, as well as

of the Board of Trustees at the American University of Beirut, and the founder of Middle East Prospects

Born in 1955, Mr. Mikati graduated from the American University of Beirut with a MBA; he also followed

advanced management programs at INSEAD, and Harvard University. A philanthropist, he is engaged in

a number of social activities, spanning Lebanese and international medical, academic, and charitable

associations and organizations which he founded with his family.

Mr. Mikati has been married for over thirty years with his wife May. Together they have three children.