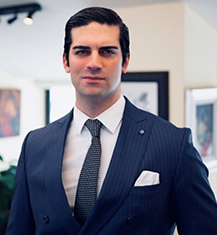 Mehmet Selçuk Yücesoy was born in Erzurum in 1987.He completed his high school education in Michigan, USA between 2004-2006 with a full scholarship at AFS / White House supported YES (Youth Exchange Study) program with honors and his higher education in Political Science and International Relations at TOBB (Union of Chambers and Commodity Exchanges of Turkey) University in Ankara, Turkey. During his higher education, he had a part an active role in MUN (Model United Nations) and served as the secretary general for 2 years, and also studied at UNHCR (United Nations High Commissioner for Refugees) for 2 terms. He started his career as an intern while he was studying in the last year of higher education between 2011-2012 , and continued as an expert in the advertising and public relations department till 2013. He advanced his career in Dorçe as Qatar country manager between 2013-2015, general manager representative between 2015-2019 and he still has been working as business development manager of the company. He participated in various meetings within the scope of his career at DORCE between 2011-2022, in more than 80 countries and he took part in the development of EPC/EPCM/BOT/PPP/design and build construction projects, development of modular housing projects with MMC (Modern Methods of Construction), business development and execution processes of mobilization, emergency settlement, logistics support and worker camp projects for International Humanitarian Aid Organizations, Defense Industry, Mining and Oil & Gas Projects. 2 years in Qatar, 2 years in West Africa (Mauritania, Angola, Nigeria, Senegal), 9 years in East Africa (Mozambique, Uganda, South Africa, Kenya) 1 year (Eastern Europe) and 1 year in Pakistan. He has participated in various exhibitions, meetings and events that he received various awards in more than 20 countries as spokesman for Modular Structures and offsite construction . The main ones of these events are: Nigeria LNG Congress 2022; NATO Security and Investment Summit 2020, Libyan in Energy / New Era, Tunisia, 2020; Uganda Oil and Gas Summit, Kampala 2020; Investment Summit, Islamabad, Pakistan, 2019; Offshore Modular Facilities Conference, Houston, USA, 2016, Finance of Modular Housing Projects in Africa 2016 South Africa. He is currently member of Qatar Businessmen Association, DEIK (Foreign Economic Relations Board) Uganda, DEIK UK and DEIK Iraq Business Councils, MBI (Modular Building Institute) and Turkish Contractors Association.

All Sessions by Mehmet Selçuk Yücesoy