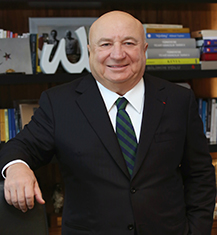 Founding partner of TAV Airports, Mustafa Sani Sener served as a member of Board of Directors, President and CEO between 1997 and 2022. On 1 May 2022, he was appointed as the Vice Chairman of the Board. Founded in 1997 with the Istanbul Ataturk Airport BOT project, TAV Airports achieved huge financial and operational growth under the leadership of Mr. Sener. Today the company manages a portfolio of 15 airports in eight countries. Mr. Sener, graduated from Karadeniz Technical University (KTU) Faculty of Mechanical Engineering in 1977, Şener earned his master’s degree (M. Phil) in fluid mechanics in 1979 from University of Sussex in the UK. He was awarded an Honorary Doctorate in engineering from KTU for “his invaluable contributions to the development of Turkish engineering at the international level”, as well as an Honorary Doctorate in Business Administration from the New Hampshire University “for his accomplishments in project and risk management throughout his tenure at TAV”. Prior to his career at TAV Airports, Şener served in various positions, from project manager to general manager, in national and international projects. He attended the executive education program on the management of complex systems at the Massachusetts Institute of Technology (MIT). He gave a lecture in Harvard Business School MBA Program on TAV Airports Case Study by HBS. Mustafa Sani Şener previously served on the Board of Airports Council International (ACI World) and acted as the chairman of the Foreign Economic Relations Board of Türkiye (DEIK) Turkey-France and Turkey-Croatia business councils. Since January 2022, Şener is acting as the Chairman of the DEIK Turkey-Kazakhstan Business Council. In 2016, Şener was awarded the Legion d'honneur by the President of the Republic of France François Hollande, due to his contributions to the relations between Turkey and France and he was given the High Honour of Service by the Georgian state. In 2019 he was honored with Medal of Merit for Macedonia Republic for the improvement of business and commercial relations in Macedonia and Turkey. In the voting carried out by Thomson Extel among national and international finance corporations, he was chosen first in the category of “The Best CEO” in Turkey in 2010, 2011, 2014, 2015 and 2016, and third in the European Transport Sector in 2014.

All Sessions by Mustafa Sani Şener