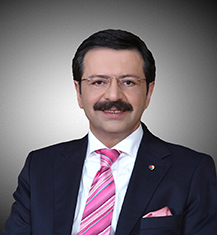 Mr. Rifat Hisarcıklıoğlu earned his B.A. degree in Economics and Management from Gazi University in Ankara. After completing his undergraduate degree, his career started in family business and currently he is the Chairman of Eskihisar Group of Companies, which operates in the fields of construction, construction materials, export and import, investments, land development, food industry and automotive sector. After a one year vice-presidency period at The Union of Chambers and Commodity Exchanges of Türkiye (TOBB) , the largest non-profit business organization in Türkiye, covering 365 Chambers and Commodity Exchanges and representing 1.5 million companies, Hisarcıklıoğlu was elected as the President of TOBB in 2001 and was re-elected respectively in 2002, 2005, 2009, 2013 and 2018. Hisarcıklıoğlu holds many titles in various organizations: Vice President of the Islamic Chamber of Commerce, Industry and Agriculture; President of the Turkic Chamber of Commerce and Industry; Co-President of the Turkish-Arab Chamber; Co-Chairman of PNB Turkey - Partners for a New Beginning; Chairman of the Economic Policy Research Foundation of Turkey; Chairman of Turkey’s Automobile Joint Venture Group – TOGG; TUBITAK Science and Technology High Council Member; High Advisory Board Member of UNICEF National Committee of Turkey; Advisory Board Member of Construction Installation Industry Materials Association and many more… Over the year Mr. Rifat received several recognitions, awards, and medals : State Order by the Federal Republic of Germany; The Legion of Honour by the French Republic Gold Medal of Merit by the Austrian Republic The 'Commendatore' from the Italian Republic Spanish Order of Civil Merit with degree of Encomienda Medal of Inspiration from Mongolia Medal for Development of Friendship and Cooperation from Kazakhstan The Mediterranean Leadership Award by the John Hopkins University, USA. The Austrian Federal Economic Chamber Gold Medal Medal of Honor from the Assembly of French Chambers of Commerce and Industry Honorary Membership Award from the Chamber of Commerce and Industry of Romania Medal of Honor by Ukrainian Chamber of Commerce and Industry Honor Award from the Pakistan Federation of Chambers and Commerce Medal of Honor by Georgian Chamber of Commerce and Industry The Gratitude Award from the Islamic Chamber of Commerce and Industry;

All Sessions by Rifat Hisarciklioğlu