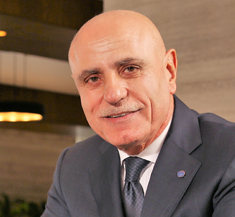 Mr. Selim El Zyr, Vice Chairman of the Board of Rotana, co-founded the company in 1992 and served as its President and CEO until December 2013. As Vice Chairman, he looks after the company’s strategic development and is part of the Executive Committee.

El Zyr graduated from Ecole Hoteliere de Lausanne (EHL) in 1970. After completion of his further studies in Cornell, he spent 12 years with Hilton International in Germany, Spain, Egypt, Canada and the U.A.E. until he earned the title of Regional Director. However, his biggest achievement was the co-founding in 1992 of Rotana, the first Middle Eastern hotel management company. Selim El Zyr ensured that the signature trademark steadily made Rotana’s presence known in every city within the region.

His ambitious managerial direction is credited with building Rotana’s extensive portfolio in the Middle East and beyond, which officially stands at 111 properties throughout the Middle East, Africa, Eastern Europe and Turkey.

Ongoing innovations at Rotana were aggressively driven by El Zyr, including a pioneering move into innovative new products and services such as the introduction of the “All Suites” concept in 1996, which was rebranded in March 2008 to Arjaan Hotel Apartments by Rotana; entry into the affordable business hotel category with Centro by Rotana in 2006, introduction of the alcohol-free brand Rayhaan by Rotana in 2008 and key partnerships forged with some of the world’s most respected Food & Beverage franchises like the award winning Blue Elephant, Trader Vic’s, and Benihana. El Zyr also led other key initiatives such as the introduction of the company’s loyalty programme “Rotana Rewards”, its Executive Club concept “Club Rotana” and Spa concept “Zen the spa at Rotana”

Under El Zyr, the company has amassed a huge volume of awards and recognitions including the Superbrand award for “Excellence in Branding”, the WTM Global Award for “Best Operation in the Middle East & for Contribution to Tourism in the Region” in 2002, and a place on the prestigious Forbes Arabia Top 40 Arab Brands list in 2006. To date, Rotana has won around 400 prestigious industry awards for demonstrating a sustained commitment to excellence in hospitality.

El Zyr himself has received numerous recognitions and awards including the Middle East CEO of the year in 2012 and 2013 and he was awarded the ”National Cedar Decoration” by the Lebanese President, as appreciation of his efforts and contribution to both the Tourism and Economical fields, together with his role in the development of the Hospitality industry, in Lebanon and the Arab World. Furthermore, he has been awarded an honorary doctorate of Business Administration in Hospitality Management from Johnson & Wales University. El Zyr was also named the Middle East’s most powerful hotelier and most influential industry professional in the first edition of the “Hotelier Middle East Power 50” in 2009, and a Lifetime Achievement Award at the WTM Global Awards in London in 2012.

All Sessions by Selim El Zyr